I first read Isaac Asimov’s seminal science fiction Foundation trilogy as an adolescent. It was challenging and sometimes confusing, but worth the effort. So, I was excited to discover the new television series based on the iconic books that premiered last Friday. Apple TV+ released the first two episodes of the adaptation. It was created by David S. Goyer (Batman Begins, Man of Steel), with Jared Harris starring as Hari Sheldon. Other cast members include Lee Pace, Lou Llobell, Leah Harvey, Laura Birn, Terrence Mann, Cassian Bilton and Alfred Enoch. The season’s remaining eight episodes will show every Friday.

The Foundation series is a must-read for anyone interested in the science-fiction genre. It explores the story of a distant future in which a Galactic Empire spans the Milky Way, scientist Hari Seldon has created a discipline called psychohistory that can predict the actions of large populations. Using psychohistory, Seldon discovers that the Galactic Empire is on the verge of collapse and the galaxy will experience 30,000 years of chaos before a second empire can emerge. Seldon creates a plan to reduce the coming dark age to a single millennium by safeguarding all human knowledge with an organization of scientists and engineers called the Foundation. Asmiov’s series was originally a trilogy consisting of Foundation (1951), Foundation and Empire (1952) and Second Foundation (1953). He later wrote two sequels–Foundation’s Edge (1982) and Foundation and Earth (1986)–and two prequels, Prelude to Foundation (1988) and Forward the Foundation (1993).

If you happen to own the set of first editions pictured above, it’s worth more than $7,000. 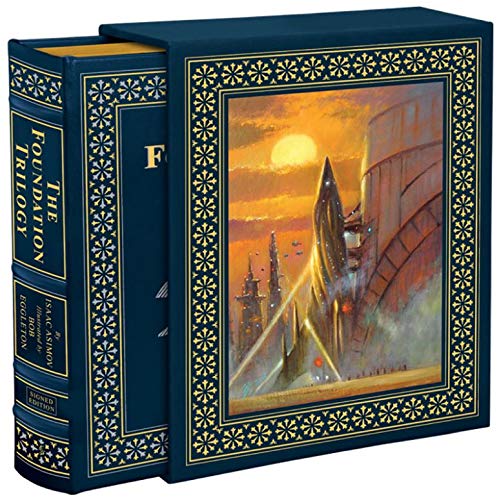