Stieg Larsson only granted one interview about the “Millennium Trilogy” before his untimely death in 2004. Lasse Winkler, editor-in-chief of the of the Swedish book trade magazine Svensk Bokhandel recently reminisced about his singular encounter with the mysterious author and some of the surprises that Larsson revealed.

Until The Girl With The Dragon Tattoo was published Larsson was widely known as the publisher of the progressive, leftist magazine Expo and as an anti-skinhead campaigner, but few people knew that he had reviewed crime fiction for the Swedish TT News Agency for years. Larsson also collaborated on articles about detective fiction for TT.

The seeds for the “Millennium Trilogy” were planted at that time, but the real inspiration came when Larsson tried to imagine what the fictional character Pippi Longstocking would be like in the 1990s. He re-imagined Astrid Lungren’s renowned children’s book heroine as a 25 year-old social outcast, stumbling upon the spark that would bring Lisbeth Salander to life. He turned to another Lungren character, Kalle Blomkvist boy detective, as inspiration for Salander’s partner journalist Mikael Blomkvist.

Larsson also revealed that the trilogy was actually intended as a five book series, and that the fourth book was about thirty percent complete at the time of the Winkler interview. He also indicated that he’d keep writing the Salander books as long as people wanted to read them.

Probably the biggest surprise from the Winkler interview is that the trilogy was initially submitted to the Piratförlaget publishing house, which didn’t even bother to read the manuscripts before rejecting the series. Fortunately for us, a friend of Larsson took the books to Norstedts publishing and the rest is history. 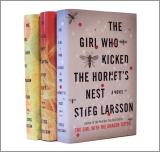 This entry was posted in Books, Europe, Writing and tagged Mystery. Bookmark the permalink.

1 Response to The Mysterious Stieg Larsson