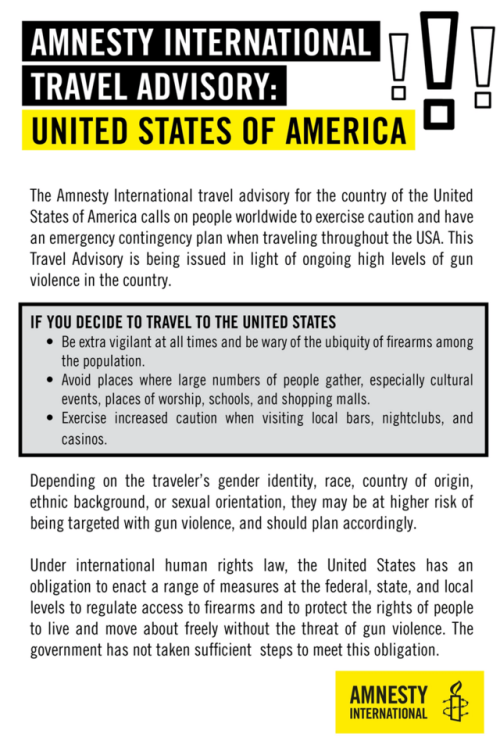 I have recently heard from some TBTP readers who have concerns about travel safety in the United States. With a number of countries including Japan, Germany, and New Zealand issuing travel advisories for their citizens considering visiting the U.S., it’s not surprising that some folks have trepidation regarding travel here. Now, Amnesty International has actually published a formal advisory due to the surging levels of gun violence.

In response to the queries that I have received on the issue of safety, I have tried to be as honest as possible in my responses. My answer to this thorny question is: it depends where you are planning to go and your ethnic background. If your travels will take you to major cities such as New York, stick to tourist areas and you’ll be fine. In fact, New York City is one of the safest large urban areas in the U.S.. If you are visiting one of our wonderful national parks, again you’ll be okay. However, if your travels are focused on the American south, I would suggest a change in plans. I admit that I am biased, but I have lived in the south and have family there. The reality is that so-called “Red” states tend to be places where people regularly carry firearms and in many places what are known as “open carry” laws allow any adult moron to have guns in their possession almost anywhere. the result is more gun violence.

The other issue is ethnic background. In many cases people of color are specific targets of white nationalist gun violence. This includes people from the Middle East, South Asia, South America, and people of African descent.

Some might suggest that the Amnesty International travel advisory, or even the ones issued by national governments, could be politically motivated and aimed at embarrassing the illegitimate government that runs this country now, but as far as I’m concerned they are actually called for in the present U.S. environment.

If you have concerns about visiting the U.S., or have questions about specific areas, please feel free to contact me directly via email at travelbetweenthepages@gmail.com.

This entry was posted in Air Travel, Tourism, USA and tagged travel safety. Bookmark the permalink.