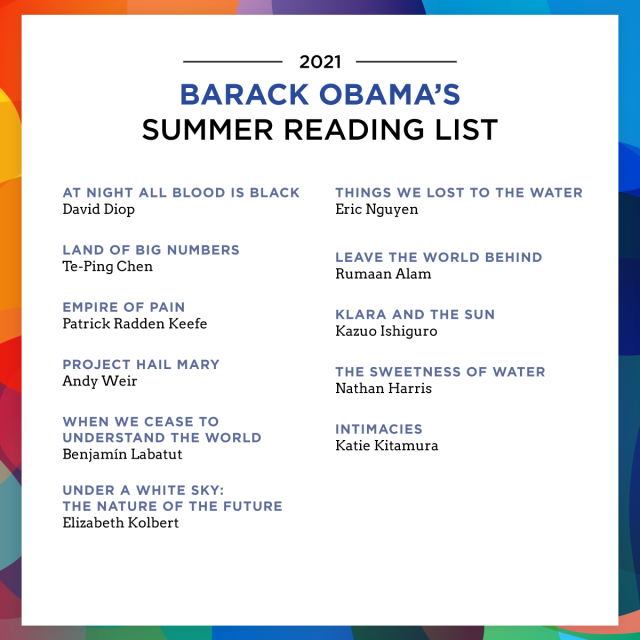 Once again Barack Obama has released his summer reading list. On Facebook, he wrote, “Whether you’re camped out on the beach or curled up on the couch on a rainy day, there’s nothing quite like sitting down with a great book in the summer. While we were still in the White House, I began sharing my summer favorites–and over the years, it’s become a little tradition that I look forward to sharing with you all. So without further ado, here are some books I’ve read recently. Hope you enjoy them as much as I did.”

At Night All Blood Is Black by David Diop
Land of Big Numbers by Te-Ping Chen
Things We Lost to the Water by Eric Nguyen
Empire of Pain by Patrick Radden Keefe
Leave the World Behind by Rumaan Alam
Project Hail Mary by Andy Weir
Klara and the Sun by Kazuo Ishiguro
The Sweetness of Water by Nathan Harris
When We Cease to Understand the World by Benjamín Labatut
Intimacies by Katie Kitamura
Under a White Sky: The Nature of the Future by Elizabeth Kolbert

I’ve read three of the selections on President Obama’s list. Two were hits and one was a disappointing miss. I won’t say which one I wouldn’t recommend, but I expected more from an author who won a Nobel Prize for Literature.