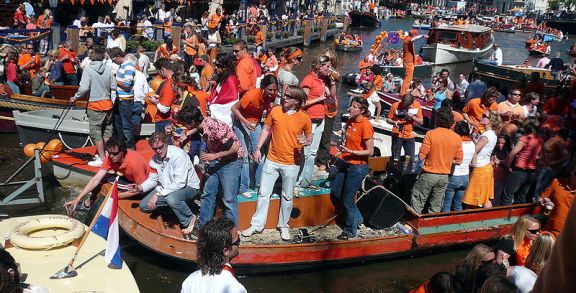 Every April 30th, the citizens of the Netherlands celebrate Koninginnedag or Queen’s Day, a national holiday that commemorates the reigning Queen’s birthday. Like Mardi Gras in New Orleans, New Year’s Eve in Times Square, St. Patrick’s Day in Dublin and Carnival in Rio (well maybe not Carnival) all squeezed into one day, Koninginnedag is an excuse for the entire nation to have a huge spring party.

The festivities actually begin on the night of the 29th with Koninginnenacht celebrations and runs late into the night on the 30th. Local associations called Ornajecomite organize community events throughout the Netherlands, but most of the large-scale activities are now sponsored by municipalities and businesses. The biggest events are free outdoor concerts, the largest are sponsored by radio stations in Amsterdam’s Rembrandtsplein and the Museumplein.

A more sedate feature of Koninginnedag is the nationwide vrijmarkt or freemarket. All over the country there are giant street sales, flea market and neighborhood rummage sales. Queen’s Day is the one day each year that the government allows unlicensed street sales and suspends the VAT for individual transactions. According to some estimates, these sales amount to over $400 million each year.

Although I’ve visited the Netherlands many times over the years, I always seem to miss the Queen’s Day celebrations. Somehow I manage to be in the country the month before or the month after. Oh well, maybe next year .