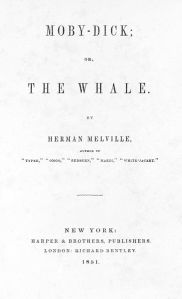 novel Moby Dick was out of print for decades. In fact, if a copy had not discovered in a secondhand bookshop, the seminal work may have been lost forever. Yeah for used bookstores ! Anyway, here’s a brilliant, though somewhat bizarre, mash-up of Moby Dick; or, THE Whale, a poetry-slamesque voice over by Orson Wells and Led Zeppelin’s amazing cut Moby Dick from their album Led Zeppelin II. Brooklyn-based multimedia artist Alex Itin created the video and did the drawings (using two copies of the novel).