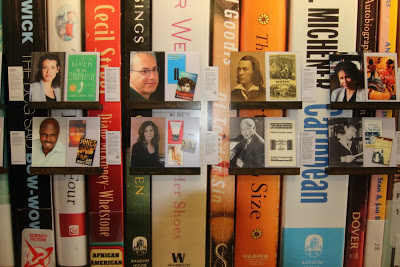 Philadelphia is widely known for it’s treasure-trove of historical sites and it’s rich architectural heritage. And of course, it’s the mural arts capital of the world. But less attention has been focused on the area’s splendid literary legacy.

Opened just in time for the city’s massive 4th of July celebrations, the terrific Philadelphia’s Literary Legacy exhibit at Philadelphia International Airport  remedies that oversight by shining a light on fifty local literary luminaries. Working in partnership with the famed Philadelphia Free Library, the airport created an exhibit that focuses on renowned authors, playwrights, poets and illustrators from different genres, eras and backgrounds.

Philadelphia’s Literary Legacy includes historical figures long connected with Philadelphia, such as Benjamin Franklin, W.E.B. DuBois and Louisa May Alcott, as well as writers who may not be as well known for their Philly connections, like R. Crumb, Ben Bova and I.F. Stone. I was especially pleased to see that the organizers included the great noir writer David Goodis in the show; he’s so often overlooked. They’ve also included some terrific contemporary local authors, such as Solomon Jones, Ken Kulfus and poet laureate Sonia Sanchez.

The exhibition runs for a full year. The only hitch is that the show is in the airport’s International Terminal A-East and you need a ticket to access the area or a press card.