Resistance Is Not Futile 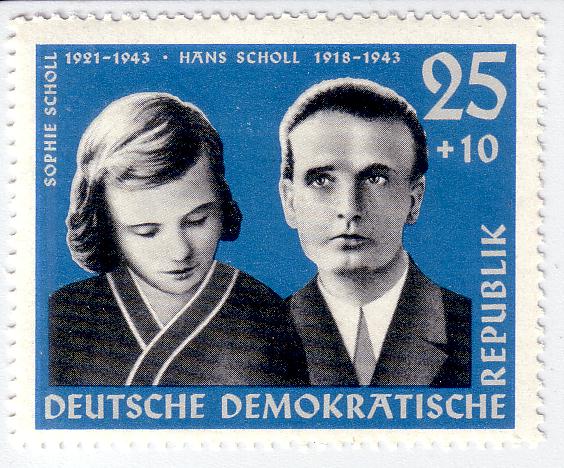 In response to my post last week on the 10th anniversary of the American publication of Hans Fallada’s heartbreaking novel Every Man Dies Alone, TBTP reader Lincoln S. reminded me about the real life story of brother and sister Hans and Sophie Scholl and the anti-Nazi resistance group called the White Rose. This short animated video from TED-Ed and Iseult Gillespie (see below) offers an introduction to these courageous non-violent resisters. If you are interested in more detailed information on the White Rose and German resistance to the Nazi Regime, you may want to check out A Noble Treason by Richard Hansen or An Honourable Defeat by Anton Gill.

Amidst the omnipresence of violence during World War II, nonviolent protest is often overlooked or unheard of. However, there were several resistance campaigns that took place in Germany, led by its own citizens. One such campaign in the period of 1942-1943 was the resistance initiated by the White Rose society. Although they were ultimately unsuccessful, the members of the White Rose became an influential example of student resistance against repressive regimes.

The main leaders of the campaign, Hans Scholl, Alex Schmorell, and Sophie Scholl, were not all anti-Nazi throughout their entire lives. Schmorell’s family was always opposed to the Nazi regime, but the young Scholls had originally believed in Hitler’s values and even joined the Hitler Youth despite their father’s disapproval. Gradually, Hans and Sophie began to sympathize with their father’s views of the regime, especially when they observed harsh treatment and dehumanization of their Jewish friends. Breaking off from the common theory that citizens should support their troops in war no matter what the circumstances, the young Scholl siblings thought that it was the duty of citizens to stand up against what they perceived as an evil regime, even in wartime, especially when it was killing such a huge quantity of its own citizens. Hans tried to alter the direction of the movement from within the Hitler Youth, but was immediately thrown out and even sent to court.

Organized resistance was essentially out of the question since the Gestapo was permitted to listen to any phone call, open any mail, or search anyone’s person, all without reason. Speaking openly and honestly with friends was also rare, since people never knew who was a Nazi spy, or which one of their friends or neighbors would turn them in. This is not to suggest that opposition of the regime was nonexistent; on the contrary, we now know that there were over three hundred citizens who openly disagreed with the Nazi mindset, but groups of them were so small and isolated that it was difficult to know of each other and therefore initiate a larger movement.

George Wittenstein, another member of the White Rose, and Alex Schmorell met in 1938 on an obligatory two-year army service where they were in the same training school for medics. By 1939, most of the members of the White Rose were enrolled at the University of Munich. However, shortly after the war started, most of the medical students were drafted and required to attend classes in uniform. It was in this student company that Wittenstein introduced Schmorell and Hans Scholl.

Within the first couple of months at the University of Munich, Hans Scholl created a group of intellectual medicine students that convened at nights to talk about cultural subjects, and would even invite professors, writers, and musicians to come lecture to the group. This group, which had fostered deep friendships through similarities in profound subjects beyond the common interest in medicine, initially avoided the topic of politics altogether. However, as the regime became increasingly oppressive, the group realized the necessity of taking action.

In the early summer of 1942, Hans Scholl and Alex Schmorell wrote the first four of six opposition leaflets, called the “Leaves of the White Rose.” These leaflets attacked the Nazi regime and mentioned its crimes, from the mass extermination of Jews, to the dictatorship and the elimination of the personal freedoms of Germany’s citizens. Furthermore, it called the Nazi regime evil, and called for Germans to rise up and resist the oppression of their government. The leaflets also contained quotes from great philosophers and highly esteemed writers, demonstrating how they were clearly aimed at the intellectual public, and especially students and professors. At the bottom of the leaflets was the phrase, “Please make as many copies of this leaflet as you can and distribute them.”

The “Leaves of the White Rose” were left in telephone boxes, mailed to students and professors throughout Germany, and brought by train to spread the White Rose’s beliefs to other regions of the country. Since traveling on trains with such dangerous documents was extremely risky, females began to take on the responsibility of distributing leaflets to other cities because they were less likely to be searched by the Gestapo. Of the first hundred leaflets that the students mailed, thirty-five were given to the Gestapo. However, many of the pamphlets successfully arrived at their destinations, and some even showed up in different parts of Austria.

All four leaflets were written in a relatively short time period, between June 27 and July 12. As far as is known today, Hans Scholl wrote the first and fourth leaflets, while Alex Schmorell wrote the second and third ones. George Wittenstein edited the third and fourth leaflets. The “Leaves of the White Rose” caused a remarkable reaction among the student body, for this resistance literature challenged the regime’s authority and stimulated ideas of opposition among young people.

Sophie Scholl enrolled in the University of Munich shortly following the creation of the first leaflets, and soon learned about the White Rose society. Although Hans originally opposed her participation in the group in an attempt to defend her, he eventually surrendered and allowed her to join. Sophie soon became one of the main leaders of the group. A mutual friend of Hans and Sophie, Christoph Probst, also joined the White Rose around this time, but did not help write the leaflets since he had transferred to the University of Innsbruck.

In the later months of the summer, the University did not know what to do with the medical students they had drafted so they sent them to the Russian front for 3 months to experience medical care under fire, and to work as physician assistants in field hospitals. During this time, Willi Graf, another medical student, befriended Hans and Alex and became an active member of the group once they returned to the University in November. After seeing the treatment of the Russians, the members of the White Rose understood that the only way Germany could be saved was by losing the war, a difficult realization for the students who truly did love their homeland. Once they returned to Germany, their energy increased and they began writing their next leaflet.

When the group returned, their main objective was to increase the size of their campaign and to find willing participants at other universities to continue to spread the group’s message. By this point, bombings over Germany began to take place, and the citizens felt the effects of war; thus, they were slightly more willing to voice their opinions against the regime. Around this time, Kurt Huber, a professor of philosophy, psychology, and musicology at the University of Munich joined the campaign.

Although the pamphlets were the main method of opposition by the White Rose, on February 4, 8, and 15, they painted huge slogans on walls throughout Munich, including at the university. The graffiti was short and simple with statements such as: “Freedom!” “Down with Hitler!” and “Hitler the Mass Murderer!”

The fall of Stalingrad in February 1943 was a great turning point in the war and inspired Huber to write the fifth leaflet at the request of Hans. The group accepted the draft, making only minor changes, and sent it out between February 16 and 18. This leaflet took a different tone and was now entitled “Leaflets of the Resistance Movement of Germany,” as was the sixth and final leaflet.

While furious Nazi officials tried to clear away the unexpected call for freedom and justice, the rebellion began to spread, first by jumping to Berlin. A medical student who was friends with Hans took the responsibility of forming a similar resistance group there and brought copies of the leaflets that the group wrote. Inspired by the courage of the White Rose, students also decided to become active in Freiburg. Later, a female student carried a leaflet to Hamburg where yet another group of students took up the responsibility of spreading the resistance even further.

The sixth leaflet was the final one written. On February 18, 1943, Hans and Sophie went to the university with a large suitcase filled with leaflets to distribute. They placed stacks in the hallways minutes before lectures were dismissed, but there were still extra leaflets when finished. Consequently, Hans and Sophie went to the roof and dumped the rest of the suitcase into the court. The two nearly went unnoticed, but were observed by a senior janitor at the university who locked the doors of the building and turned them over to the Gestapo. When a draft of a leaflet that Christoph Probst had written was found in Hans’ pocket, Probst was arrested as well. Within a few days, over eighty people were arrested throughout Germany, some executed and some sent to concentration camps.

On February 22, 1943, a “People’s Court” was opened in Munich and after a trial that lasted barely four hours, Hans Scholl, Sophie Scholl, and Christoph Probst were convicted of high treason and sentenced to death. The presiding Judge, Roland Freisler, who had been sent from Berlin, could not understand what had corrupted these German youths. After all, they came from good families, attended German schools, and had been members of the Hitler Youth. Sophie shocked everyone in the courtroom with her response: “Somebody, after all, had to make a start. What we wrote and said is also believed by many others. They just don’t dare to express themselves as we did. You know that war is lost. Why don’t you have the courage to face it?”

Hans’ and Sophie’s parents were denied entrance to the trial. However, once escorted back to the prison, the guards permitted the Scholls to reunite for the last time since the guards were so impressed by the siblings’ bravery. The guards also permitted Sophie, Hans, and Christoph to have one last meeting. Once finished, Sophie was led first to the guillotine. A witness described Sophie as unflinching as she walked to her death. The executioner also remarked that he had never seen someone meet the end of life as courageously as she did. Next was Christoph, who shouted, “We will meet each other in a few minutes!” right before his death. Last was Hans, whose last words were simply: “Long live the freedom!” The Nazis were so eager to eliminate this danger to the regime that the news of the incident was not released until after the executions took place.

This was not the end of the killing. Alex Schmorell tried to escape to Switzerland, but had to retreat due to deep snow. He was later arrested during an air raid, after being betrayed by a former girlfriend. A second trial took place on April 19, at which Schmorell, Graf, and Huber were all tried and convicted. Schmorell and Huber were later executed on July 13, 1944, and Graf was executed on October 12. Hundreds of other people connected with the White Rose were arrested and sentenced to various punishments. George Wittenstein was the only man to survive the war. He was tried after attempting to help a Jewish woman escape from Germany, but was found not guilty and was set free.

h/t to the Long Center for Civic and Social Responsibility

2 Responses to Resistance Is Not Futile