The Metropolitan Museum of Art in New York is one of my favorite go to places in the city. In fact, I’ve been visiting the Met since before I could walk. The museum’s grand entrance hall never fails to awe. This month, the space has been enhanced by an extraordinary addition of a pair of large murals by the Canadian First Nations artist Kent Monkman. 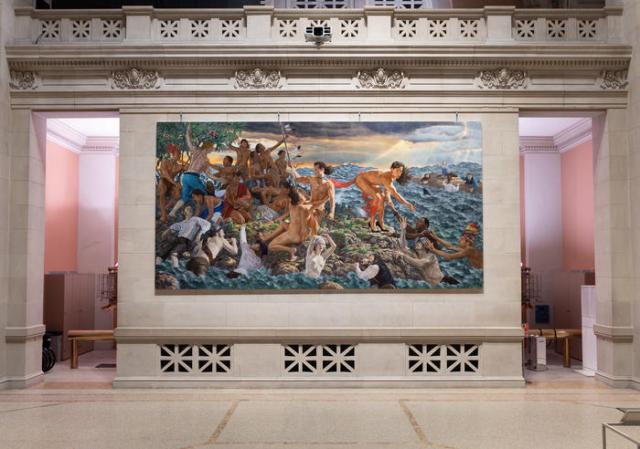 The paintings’ title derives from a Cree word meaning “wooden boat people” that was originally applied to Europeans who colonized North America. Each of the related murals features the large figure of Miss Chief Eagle Testickle, Monkman’s shape-shifting, time-traveling alter ego, who pays tribute to the tradition in Indigenous cultures of the “Two Spirit,” a third gender and non-binary sexuality. Miss Chief, whose name plays on the words mischief and egotistical, also refers to the Cree trickster figure, who challenges conventional beliefs and wisdom in traditional stories.

The paintings will be on display at the Met until April 2020.