August Heat (can drive you mad) 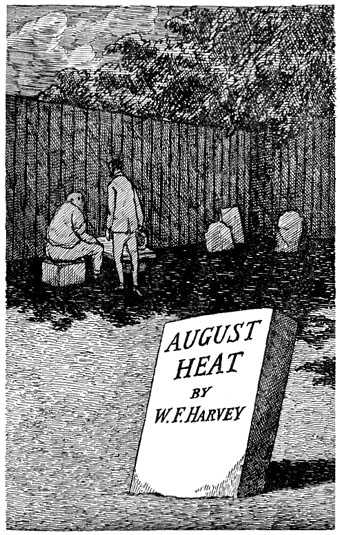 William F. Harvey (1885–1937) wrote the timely tale August Heat  which concerns a fateful encounter at the end of a sweltering Summer day.

I have had what I believe to be the most remarkable day in my life, and while the events are still fresh in my mind, I wish to put them down on paper as clearly as possible.

Let me say at the outset that my name is James Clarence Withencroft.

I am forty years old, in perfect health, never having known a day’s illness.

By profession I am an artist, not a very successful one, but I earn enough money by my black-and–white work to satisfy my necessary wants.

My only near relative, a sister, died five years ago, so that I am independent. I breakfasted this morning at nine, and after glancing through the morning paper I lighted my pipe and proceeded to let my mind wander in the hope that I might chance upon some subject for my pencil.

The room, though door and windows were open, was oppressively hot, and I had just made up my mind that the coolest and most comfortable place in the neighbourhood would be the deep end of the public swimming bath, when the idea came.

I began to draw. So intent was I on my work that I left my lunch untouched, only stopping work when the clock of St. Jude’s struck four.

The final result, for a hurried sketch, was, I felt sure, the best thing I had done. It showed a criminal in the dock immediately after the judge had pronounced sentence. The man was fat—enormously fat. The flesh hung in rolls about his chin; it creased his huge, stumpy neck. He was clean shaven (perhaps I should say a few days before he must have been clean shaven) and almost bald. He stood in the dock, his short, clumsy fingers clasping the rail, looking straight in front of him. The feeling that his expression conveyed was not so much one of horror as of utter, absolute collapse.

There seemed nothing in the man strong enough to sustain that mountain of flesh.

I rolled up the sketch, and without quite knowing why, placed it in my pocket. Then with the rare sense of happiness which the knowledge of a good thing well done gives, I left the house.

I believe that I set out with the idea of calling upon Trenton, for I remember walking along Lytton Street and turning to the right along Gilchrist Road at the bottom of the hill where the men were at work on the new tram lines.

From there onwards I have only the vaguest recollection of where I went. The one thing of which I was fully conscious was the awful heat, that came up from the dusty asphalt pavement as an almost palpable wave. I longed for the thunder promised by the great banks of copper-coloured cloud that hung low over the western sky.

I must have walked five or six miles, when a small boy roused me from my reverie by asking the time.

It was twenty minutes to seven.

When he left me I began to take stock of my bearings. I found myself standing before a gate that led into a yard bordered by a strip of thirsty earth, where there were flowers, purple stock and scarlet geranium. Above the entrance was a board with the inscription–

WORKER IN ENGLISH AND ITALIAN MARBLES

From the yard itself came a cheery whistle, the noise of hammer blows, and the cold sound of steel meeting stone.

A sudden impulse made me enter.

A man was sitting with his back towards me, busy at work on a slab of curiously veined marble. He turned round as he heard my steps and I stopped short.

It was the man I had been drawing, whose portrait lay in my pocket.

He sat there, huge and elephantine, the sweat pouring from his scalp, which he wiped with a red silk handkerchief. But though the face was the same, the expression was absolutely different.

He greeted me smiling, as if we were old friends, and shook my hand.

I apologised for my intrusion.

“Everything is hot and glary outside,” I said. “This seems an oasis in the wilderness.”

“I don’t know about the oasis,” he replied, “but it certainly is hot, as hot as hell. Take a seat, sir!”

He pointed to the end of the gravestone on which he was at work, and I sat down.

“That’s a beautiful piece of stone you’ve got hold of,” I said.

He shook his head. “In a way it is,” he answered; “the surface here is as fine as anything you could wish, but there’s a big flaw at the back, though I don’t expect you’d ever notice it. I could never make really a good job of a bit of marble like that. It would be all right in the summer like this; it wouldn’t mind the blasted heat. But wait till the winter comes. There’s nothing quite like frost to find out the weak points in stone.”

The man burst out laughing.

“You’d hardly believe me if I was to tell you it’s for an exhibition, but it’s the truth. Artists have exhibitions: so do grocers and butchers; we have them too. All the latest little things in headstones, you know.”

He went on to talk of marbles, which sort best withstood wind and rain, and which were easiest to work; then of his garden and a new sort of carnation he had bought. At the end of every other minute he would drop his tools, wipe his shining head, and curse the heat.

I said little, for I felt uneasy. There was something unnatural, uncanny, in meeting this man.

I tried at first to persuade myself that I had seen him before, that his face, unknown to me, had found a place in some out-of-the-way corner of my memory, but I knew that I was practising little more than a plausible piece of self-deception.

Mr. Atkinson finished his work, spat on the ground, and got up with a sigh of relief.

“There! what do you think of that?” he said, with an air of evident pride. The inscription which I read for the first time was this–

SACRED TO THE MEMORY

HE PASSED AWAY VERY SUDDENLY

“In the midst of life we are in death.”

For some time I sat in silence. Then a cold shudder ran down my spine. I asked him where he had seen the name.

“Oh, I didn’t see it anywhere,” replied Mr. Atkinson. “I wanted some name, and I put down the first that came into my head. Why do you want to know?”

“It’s a strange coincidence, but it happens to be mine.” He gave a long, low whistle.

“I can only answer for one of them, and that’s correct.”

But he knew less than I did. I told him of my morning’s work. I took the sketch from my pocket and showed it to him. As he looked, the expression of his face altered until it became more and more like that of the man I had drawn.

“And it was only the day before yesterday,” he said, “that I told Maria there were no such things as ghosts!”

Neither of us had seen a ghost, but I knew what he meant.

“You probably heard my name,” I said.

“And you must have seen me somewhere and have forgotten it! Were you at Clacton-on-Sea last July?”

I had never been to Clacton in my life. We were silent for some time. We were both looking at the same thing, the two dates on the gravestone, and one was right.

“Come inside and have some supper,” said Mr. Atkinson.

His wife was a cheerful little woman, with the flaky red cheeks of the country-bred. Her husband introduced me as a friend of his who was an artist. The result was unfortunate, for after the sardines and watercress had been removed, she brought out a Doré Bible, and I had to sit and express my admiration for nearly half an hour.

I went outside, and found Atkinson sitting on the gravestone smoking.

We resumed the conversation at the point we had left off. “You must excuse my asking,” I said, “but do you know of anything you’ve done for which you could be put on trial?”

He shook his head. “I’m not a bankrupt, the business is prosperous enough. Three years ago I gave turkeys to some of the guardians at Christmas, but that’s all I can think of. And they were small ones, too,” he added as an afterthought.

He got up, fetched a can from the porch, and began to water the flowers. “Twice a day regular in the hot weather,” he said, “and then the heat sometimes gets the better of the delicate ones. And ferns, good Lord! they could never stand it. Where do you live?”

I told him my address. It would take an hour’s quick walk to get back home.

“It’s like this,” he said. “We’ll look at the matter straight. If you go back home to-night, you take your chance of accidents. A cart may run over you, and there’s always banana skins and orange peel, to say nothing of fallen ladders.”

He spoke of the improbable with an intense seriousness that would have been laughable six hours before. But I did not laugh.

“The best thing we can do,” he continued, “is for you to stay here till twelve o’clock. We’ll go upstairs and smoke, it may be cooler inside.”

To my surprise I agreed.

We are sitting now in a long, low room beneath the eaves. Atkinson has sent his wife to bed. He himself is busy sharpening some tools at a little oilstone, smoking one of my cigars the while.

The air seems charged with thunder. I am writing this at a shaky table before the open window.

The leg is cracked, and Atkinson, who seems a handy man with his tools, is going to mend it as soon as he has finished putting an edge on his chisel.

It is after eleven now. I shall be gone in less than an hour.

But the heat is stifling.

It is enough to send a man mad.

1 Response to August Heat (can drive you mad)