Like thousands of other Stieg Larsson fans, I visited my local bookstore bright and early yesterday morning to get a copy of the newly released “Girl Who Kicked The Hornet’s Nest”. And like millions of fans worldwide I’m hooked on Larsson’s Millenium series. As true followers of Blomkvist and Salander know, this was originally intended as a series of ten books, but due to his untimely death in 2004, this turned out to be just three, and a fourth framework for a book left unfinished on his laptop.

The books; ‘The Girl with the Dragon Tattoo’, ‘The Girl Who Played with Fire’ and ‘The Girl who Kicked over the Hornet’s Nest’ became mega-hits in Sweden and the English, French and German language translations of the first two sold millions of copies.

Södermalm, where most of the intrigue in the Millenium series takes place, used to be a blue-collar area of Stockholm and is one of fourteen islands that make up the capital city. Over the past couple of decades the area has been spruced up (it’s now being called the “Brooklyn of Stockholm”) and is the setting for much of the action in his books – and of the Millenium tour, run by the Stockholm City Museum.

This 90-minute walking tour is in English and French and its highlights include Götgatan, where Mikael Blomkvist’s, the trilogy’s main character, office is; the view over Riddarfjärden from his apartment and  ‘Kvarnen’, a legendary drinking hall on Södermalm frequented by Lisbeth Salander, another main character in the books. 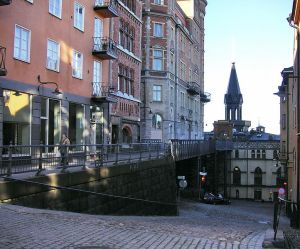 Many thanks to our friends at Visit Sweden for the information in this post.