Next week marks the official Charles Dickens Bicentennial, but commemorations have been taking place around the world for months. Now a new book by Cambridge University Professor Ruth Richardson has uncovered the real-life people who inspired Dickens’ iconic characters. 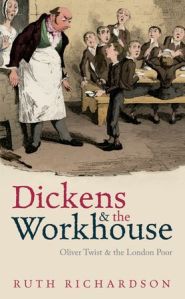 Dickens and the Workhouse: Oliver Twist and the London Poor (Oxford University Press) explores the London neighborhood where Dickens lived as a child. It began when Richardson discovered a four-story workhouse from the 1770s in Cleveland Street, London, which was likely the inspiration for the notorious workhouse in Oliver Twist. Richardson then uncovered a surprising fact previously missed by Dickens scholars: Cleveland Street was formerly known as Norfolk Street. Researchers had long known that Dickens lived in an apartment above a corner shop at 10 Norfolk Street, but they assumed the building had disappeared ages ago. Richardson re-discovered the building, now at the address 22 Cleveland Street. Dickens actually lived a just nine doors away from the infamous workhouse. Richardson then delved deeper into the life and times of the Cleveland Street neighborhood in Dickens’ day, revealing several more surprises:

In this Youtube video Richardson visits the London setting that inspired Dickens: