Born In The USA 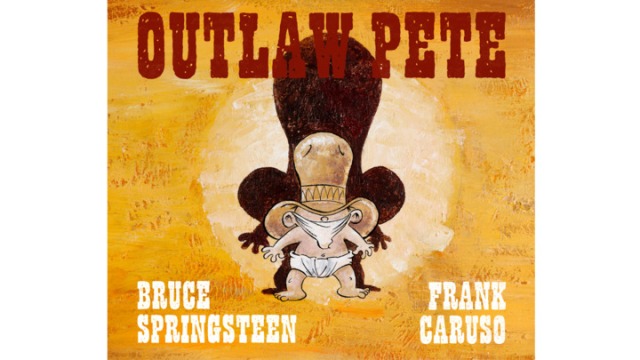 Bruce Springsteen fans have long awaited a book from Jersey’s favorite son, but few expected that it would be a children’s book. The Boss has teamed with cartoonist/ illustrator/writer Frank Caruso to produce “Outlaw Pete”, which is based on the song of the same name.

Here is the text of the press release:

Simon & Schuster announced today a major new book for the fall 2014 holiday season: Outlaw Pete by Bruce Springsteen and Frank Caruso, based on the celebrated song about a bank-robbing baby whose exploits become a meditation on sin, fate, and free will.Both the song (from Springsteen’s 2009 “Working on a Dream” album) and the new book Outlaw Pete were inspired by a children’s book, Brave Cowboy Bill (Simon & Schuster, 1950), which Bruce Springsteen’s mother used to read to him as a child. “Outlaw Pete is essentially the story of a man trying to outlive and outrun his sins,” Springsteen writes.

Frank Caruso, a cartoonist and writer, conceived of making the song into a book and created the illustrations to accompany Springsteen’s lyrics. “When Bruce wrote ‘Outlaw Pete’ he didn’t just write a great song, he created a great character,” Caruso said. “The first time I heard the song this book played out in my head. Like Tom Sawyer, Huck Finn, Dorothy Gale and for me, even Popeye, Outlaw Pete cuts deep into the folklore of our country and weaves its way into the fabric of great American literary characters. ”

“This book will be treasured by anyone who appreciates Bruce Springsteen’s unique gifts as a storyteller,” said Jonathan Karp, President and Publisher of Simon & Schuster. “Frank Caruso’s illustrations vibrantly capture the spirit of Springsteen’s work.”

Picture books for adults have undergone a renaissance of late, from the success of similarly irreverent hits such as Ann Droyd’s Goodnight iPad and Adam Mansbach’s Go the F–k To Sleep to the resurgent interest in illustrators such as Richard Scarry, Maurice Sendak, and Edward Gorey. Simon & Schuster, which acquired World rights to the work, will publish Outlaw Pete on November 4, 2014.