Most thoughtful folks here in North America are approaching the upcoming national election debacle with some degree of fear and loathing. So, it’s quite timely that the Speed Museum in Louisville, Kentucky is launching a special exhibition on their finest export after bourbon: Hunter S. Thompson. If you are not yet familiar with the father of gonzo journalism, I encourage you to check out some of his early writing. Here’s what the museum has to say about the upcoming show:

As one of Kentucky’s most famous exports, especially in the world of modern investigative journalism, the Speed is uniquely positioned to present this exhibition highlighting the professional collaborations (and personal relationships) that Thompson enjoyed with the artists and photographers who were tasked with illustrating his work, and even more importantly, articulating his vision through visual means.

Focusing on the years between 1964 and 1974 and covering the years between the publication of Hell’s Angels: The Strange and Terrible Saga of the Outlaw Motorcycle Gangs through Fear and Loathing on the Campaign Trail ’72, the exhibition will feature the work of Ralph Steadman, Annie Leibovitz, Tom Benton, and Thompson’s own photography, along with original letters and other ephemera to tell the story of the writer’s artistic partnerships.

The exhibition is timed to coincide with GonzoFest, the literary and music festival honoring the legacy of Hunter S. Thompson. The 9th Annual GonzoFest will be held on Saturday, July 20 at the Louisville Free Public Library. In addition, Gonzo! The Illustrated Guide to Hunter S. Thompson will be the third in a series of exhibitions celebrating Thompson in “A Year of Gonzo,” including Ralph Steadman: A Retrospective (University of Kentucky Art Museum) and Freak Power: Hunter S. Thompson’s Campaign for Sheriff (Frazier History Museum). 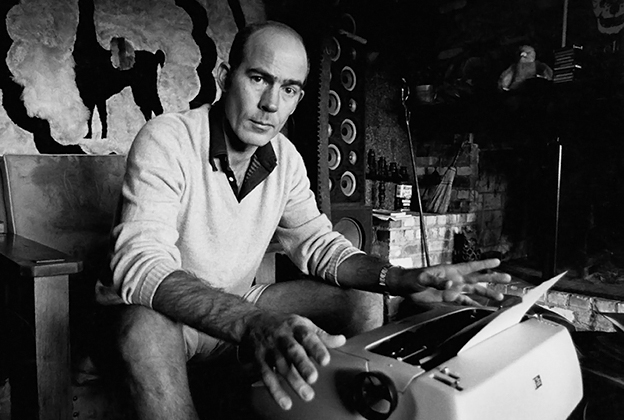