Francis Grose’s ‘Classical Dictionary of the Vulgar Tongue’ was first published in 1785, and is a dictionary of slang words. Grose was one of the first lexicographers to collect slang words from all corners of society, not just from the professional underworld of pickpockets and bandits. So while ‘The Vulgar Tongue’ includes many of the words found in earlier ‘scoundrels’’ dictionaries (such as Head’s ‘Canting Academy’), it also lists a whole range of mundane slang words such as sheepish (for bashful), carrots (for red hair), or sweet (for expert, dexterous, clever). He records many rude words, such as bum fodder (for toilet paper), or double jugg (for a man’s bottom). And he includes many nicknames for food and drink – words for gin (an enormously popular drink at the time) include: blue ruin, cobblers punch, crank, diddle, frog’s wine, heart’s ease, lightening and drain.
Grose and his assistant Tom Cocking took midnight walks through London, picking up slang words in slums, drinking dens and dockyards and adding them into their ‘knowledge-box’. ‘The Vulgar Tongue’ was recognised throughout the 19th century as one of the most important collections of slang in the English language, and it would strongly influence later dictionaries of this kind.

entries include
Betwattled — to be surprised, confounded, out of one’s senses
Blind cupid — the backside
Bone box — the mouth
Brother of the quill — an author
Cackling farts – eggs
Captain queernabs — shabby ill-dressed fellow
Chimping merry — exhilarated with liquor
Comfortable importance — a wife
Dicked in the nob — silly, crazed
Dog booby — an awkward lout
Duke of limbs — a tall, awkward, ill-made fellow
Eternity box — a coffin
Head rails — teeth
Hickey — tipsy, hiccupping
Irish apricots — potatoes
Jolly nob — the head. “I’ll lump your jolly nob for you”: I’ll give you a knock on the head.
Knowledge box — another term for the head.
Kittle pitchering — to disrupt the flow of a “troublesome teller of long stories” by constantly questioning and contradicting unimportant details, especially at the start (best done in tandem with others)
Knight of the trenches — a great eater
Just-ass — a punning name for a justice [judge]
Paw paw tricks — forbidden tricks; from the French pas pas
Penny wise and pound foolish — saving in small matters, and extravagant in great
Sugar stick — the virile member
Tallywags / Whirligigs — testicles
Whipt Syllabub — a flimsy, frothy discourse
Whipster — a sharp or subtle fellow 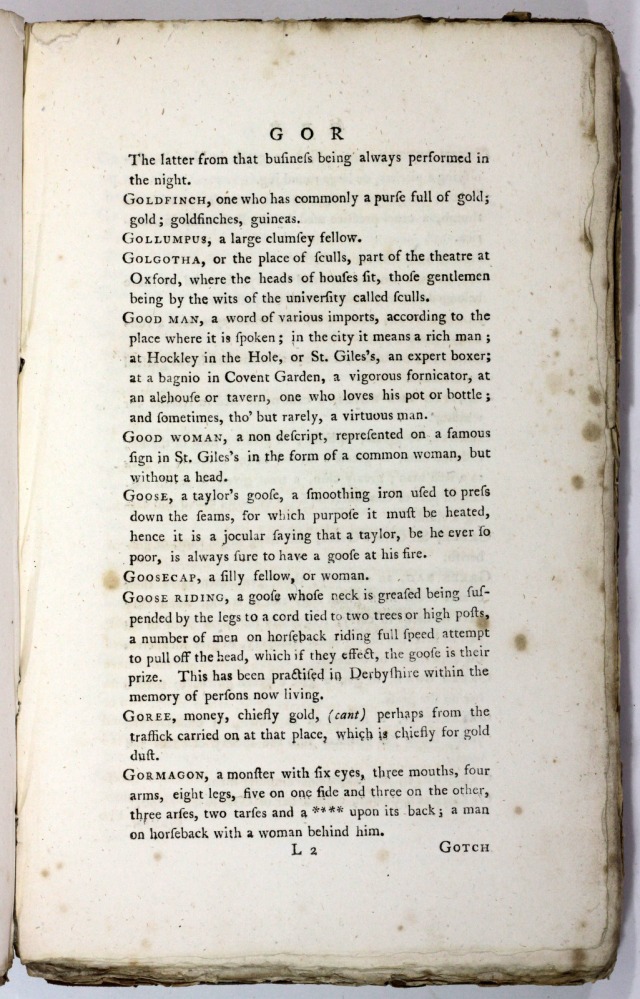