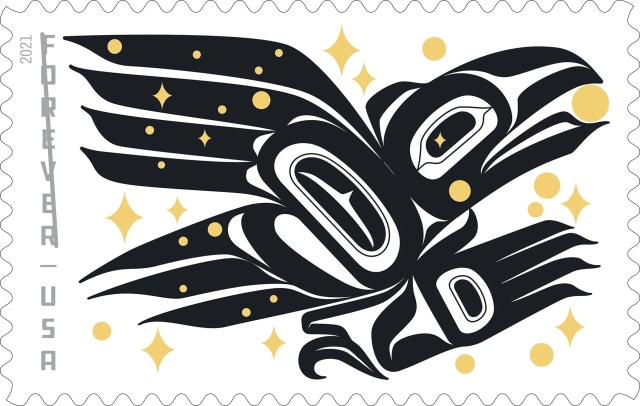 A few years ago I had the opportunity to do some traveling in British Columbia and Alaska. While I was there I became intrigued by the art, culture, and mythologies of the indigenous peoples of the region, including the Tlingt and Haida. Of course I bought some local First Nations art work as souvenirs and had the chance to visit a few artists’ studios in the process. One of the pieces that I found in southeastern Alaska depicted the story of how the Raven stole the sun (see below) and brought light to our world. The stamp depicted above is a new release from the United States Postal Service that shows the very same story. 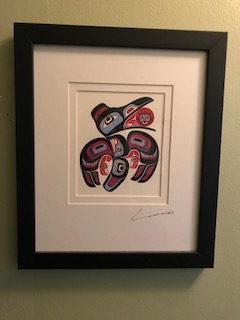 The USPS commissioned Rico Lanáat’ Worl, a Tlingit and Athabascan artist, to create a stamp. Over at his web site, Worl tells a short version of the traditional story that his image is based on. Here’s a brief explanation:

Raven and the Box of daylight is a traditional Tlingit story that is very popular and a great bridge into learning about our culture. Here is a abbreviated version of the story:

Raven is the Trickster. A time ago there was no celestial light sources. People lived in darkness. Raven heard of a chieftain who owned a collection of items of great light. Things which would light up the world. Raven decided to become a part of this household.

Raven is a Transformer.

Raven brought the sun, the moon, and the stars to the universe.

5 Responses to stealing the sun