Kafka on the Shore (and t-shirts)

When I think of the celebrated Japanese novelist Haruki Murakami  fashion does not come to mind. However, it seems that the author is much more interested in style than his novels such as 1Q84 and Norwegian Wood suggest. Murakami recently collaborated with UNIQLO to create a line of men’s T-shirts. He also plans to release a nonfiction book later this year on the subject of apparel.

The quirky range visualizes abstract objects and characters from the books on T-shirts and pins. Illustrating 1Q84, for example, is the phrase, “Don’t let appearances fool you,”  backwards, nodding at the text’s focus on alternate realities. 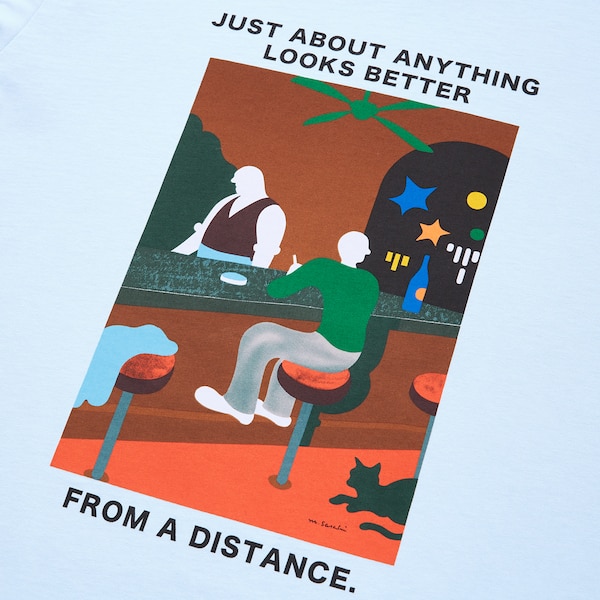 The Kafta on the Shore-themed piece, on the other hand, displays silhouettes of a perched crow. The text, “You will be the toughest 15-year-old boy on the planet,” is printed in Japanese across the artwork.

Murakami is also known for having his own jazz radio show, and a tee inspired by it showcases three of his closest allies. “Books, music, and cats have been my friends from way back,” reads the back of the shirt.

Meanwhile, t-shirts paying homage to Norwegian Wood and Pinball, 1973 revive the books’ covers and styles. Not for purchase is the special-edition tee for Hear the Wind Sing, Murakami’s debut novel; only 120 pieces of this design will be made available for lucky shoppers who purchase a Murakami-themed item.

The collection also features pins imagining the ‘Sheep Man’ from A Wild Sheep Chase, a scene from Dance Dance Dance, as well as a charming Murakami-themed sticker sheet.

1 Response to Kafka on the Shore (and t-shirts)