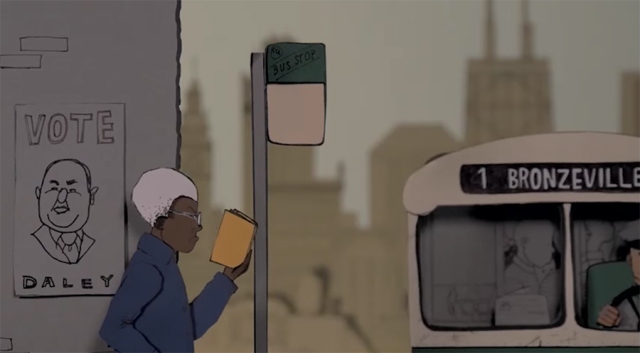 The paper-cut puppetry video below was commissioned by the Poetry Foundation and created by Manual Cinema in association with Crescendo Literary,  it animates a May 3, 1983 recording of Gwendolyn Brooks speaking during an Academy of American Poets reading series held at the Guggenheim Museum in New York City. “The Pool Players. Seven at the Golden Shovel…” This was the scene that inspired Pulitzer Prize-winning poet Gwendolyn Brooks (1917 – 2000) to write her landmark 1959 poem, “We Real Cool“.

The Pool Players.
Seven at the Golden Shovel

We real cool. We
Left school. We
Lurk late. We
Strike straight. We
Sing sin. We
Thin gin. We
Jazz June. We
Die soon.

The video’s story is by Eve Ewing and Nate Marshall with music by Jamila Woods and Ayanna Woods. From LitCharts:

The poem describes a group of teenagers hanging out outside of a pool hall. It imagines these teenagers as rebels who proudly defy convention and authority—and who will likely pay for their behavior with their lives. The poem isn’t overly pessimistic, however, and also suggests that such youthful rebellion may not be entirely in vain. It’s possible to read the poem as a warning against self-destructive behavior, and also as a celebration of people who risk their lives to challenge authority.

NB: If you subscribe to TBTP via email and the video below does not play, please click on the URL shoryt link at the bottom of your email.