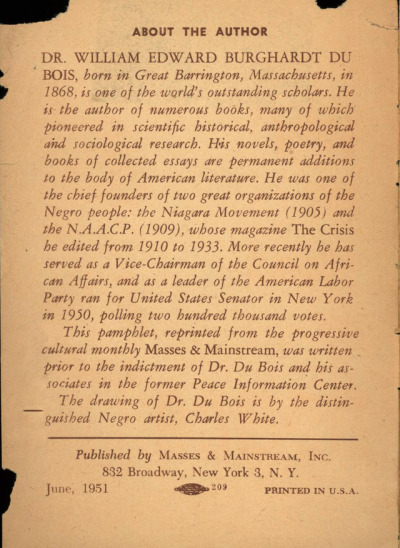 Today is the birthday anniversary of African American sociologist, historian, writer, educator, poet, scholar, and civil rights leader W.E.B. Du Bois. Born February 23, 1868, Du Bois was the first black man to earn a doctorate degree from Harvard University and one of the co-founders of the NAACP, whose history page offers a nice summary of his work: “Du Bois’s life and work were an inseparable mixture of scholarship, protest activity, and polemics. All of his efforts were geared toward gaining equal treatment for black people in a world dominated by whites and toward marshaling and presenting evidence to refute the myths of racial inferiority.”

Du Bois’s essay “I Take My Stand for Peace” was first published in the progressive monthly Masses & Mainstream and then as a pamphlet in 1951 after Du Bois was indicted when he and the other leaders of the Peace Information Center (PIC) refused to register as foreign agents after being accused of being agents for the Soviet Union. Du Bois had been under observation by the FBI since 1942 for his socialist leanings and activism.

The purpose of the pamphlet was not only to spread Du Bois’s argument against war, nuclear weapons, imperialism, and capitalism in America, but also to raise money and support for his defense and the defense of those indicted with him for involvement with the PIC.

2 Responses to Take A Stand