The Narrow Road to the Deep North

As some readers know, much of my time is generally occupied finding and selling antiquarian travel books. Although I focus mostly on 19th and early 20th century travel guidebooks, I am interested in other travel literature and unrelated genres, as well. In the course of business, I frequently get requests for specific books that are not in my catalog, hence many hours get lost searching for titles that may, or may not, be available. Recently I had an email asking if I was aware of any English language versions of the classic Japanese book The Narrow Road to the Deep North by the 17th century poet and traveler Matsuo Bashō other than the popular paperback editions. Since I hadn’t seen any, down the rabbit hole I went.

Other than an uninspiring recently published hardcover edition and some questionable self-published versions, I came up short. But time is never really wasted as I did find an interesting online translation of Bashō’s best known work in the West. Many readers outside of Japan generally think of him as a haiku poet, but even his best known book, The Narrow Road to the Deep North or sometimes translated as The Narrow Road to the Interior, was mainly written in prose.

For example, here are the first chapters that follow the book’s prologue:

It was early on the morning of March the twenty-seventh that I took to the road. There was darkness lingering in the sky, and the moon was still visible, though gradually thinning away. The faint shadow of Mount Fuji and the cherry blossoms of Ueno and Yanaka were bidding me a last farewell. My friends had got together the night before, and they all came with me on the boat to keep me company for the first few miles. When we got off the boat at Senju, however, the thought of three thousand miles before me suddenly filled my heart, and neither the houses of the town nor the faces of my friends could be seen by my tearful eyes except as a vision.

With this poem to commemorate my departure, I walked forth on my journey, but lingering thoughts made my steps heavy. My friends stood in a line and waved good-bye as long as they could see my back.

I walked all through that day, ever wishing to return after seeing the strange sights of the far north, but not really believing in the possibility, for I knew that departing like this on a long journey in the second year of Genroku I should only accumulate more frosty hairs on my head as I approached the colder regions. When I reached the village of Soka in the evening, my bony shoulders were sore because of the load I had carried, which consisted of a paper coat to keep me warm at night, a light cotton gown to wear after the bath, scanty protection against the rain, writing equipment, and gifts from certain friends of mine. I wanted to travel light, of course, but there were always certain things I could not throw away either for practical or sentimental reasons.

I went to see the shrine of Muronoyashima. According to Sora, my companion, this shrine is dedicated to the goddess called the Lady of the Flower-Bearing Trees, who has another shrine at the foot of Mt.Fuji. This goddess is said to have locked herself up in a burning cell to prove the divine nature of her newly-conceived son when her husband doubted it. As a result, her son was named the Lord Born Out of the Fire, and her shrine, Muro-no-yashima, which means a burning cell. It was the custom of this place for poets to sing of the rising smoke, and for ordinary people not to eat konoshiro, a speckled fish, which has a vile smell when burnt 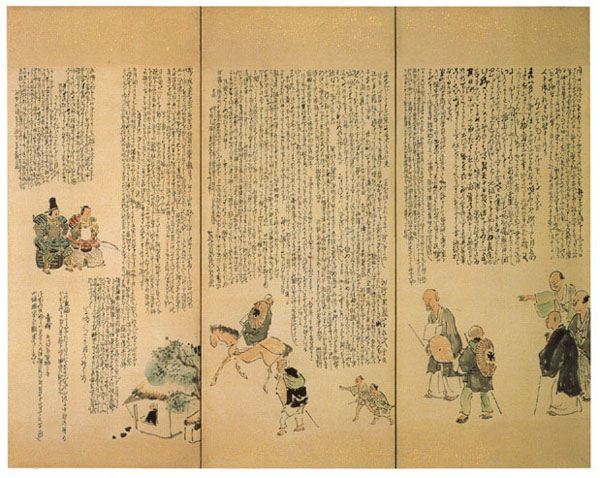 I never did find an interesting, illustrated edition in English, but I did enjoy the search.