Regular visitors to Travel Between The Pages may recall that my niche market as a bookseller has long been travel guides and travel literature. I recently discovered this unique 1815 travel guide to Madeira and the Caribbean that is illustrated with a series of supplemental plates that contain sort of a first-mate’s log and the account of parallel trade voyage pictographically—with hieroglyphs, as the author states. These small drawings capture the sailor’s daily events during an 1814 voyage with a rather unusual story-telling device for the era and prefigure the concept of scripting in emojis. 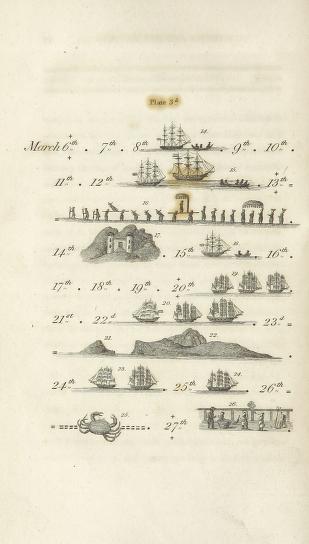 The volume is titled The Traveller’s Guide to Madeira and the West Indies. Being a hieroglyphic representation of appearances and incidents during a voyage out and homewards. … With a treatise explanatory of the various figures, etc; 1815; Haddington, G. Miller and sons. The clever book employs a series of “hieroglyphic” plates to frame an account of a trade voyage. The illustrated pages display a calendar-like grid, for each day either a dot, to connote nothing of importance happened, or a little illustration summing up that day’s events. For a further explanation of these “emblematic figures” the author offers an “Explanatory Key”, which reads ostensibly as a regular journal recounting highlights from the course of days, except rather than under the headings of dates, they relate directly to the pictures and are so numbered. According to its anonymous author, referred to only as “a young traveller”, the plates came first, the motive for which was a “deficiency of time to note down my observances as they occurred”. 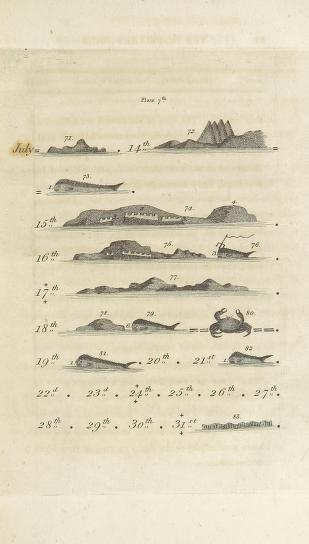