Yes, it can happen here 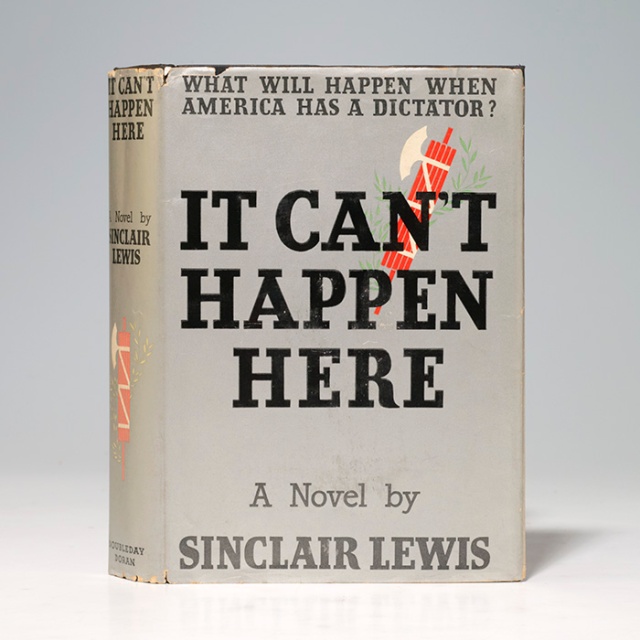 There are a few memorable books that I read during my childhood that had profound influence on my social and political consciousness. Sinclair Lewis’ novel It Can’t Happen Here was one that I’ve never forgotten. The book was published during the rise of fascism in Europe and chronicles corporate-Fascist take over of the United States following the election of Berzelius “Buzz” Windrip, a demagogue who promotes discord and division, but who promises dramatic economic and social reforms while promoting a return to patriotism and “traditional” values. After his election, Windrip takes complete control of the government and imposes totalitarian rule with the help of a ruthless paramilitary force called the Minute Men. The book’s plot centers on journalist Doremus Jessup’s opposition to the new regime and his subsequent struggle against it as part of a liberal rebellion.

This 85 year-old novel seems all too timely in the era of Trump and his neo-Fascist minions. It’s comforting to know that the book community has stepped-up to our Il Duce wannabe by publishing both novels and non-fiction aiming to raise political consciousness. The printing and bookbinding community has also been active in combating the rise of Fascism. One of the best examples has been the creation of dramatic new editions of Lewis’ prescient novel by eminent bookbinder Richard Minsky.

Minsky used some of his own blood, which is spattered on the spine and cover, and matched the color of the fresh blood with acrylic paint for most of the panel. The blood has turned brownish over time, so the acrylic maintains the illusion of immediacy.

You can learn more about the project on Minsky’s website.